December 2020 - the hotel is currently open from Monday to Friday to cater for business guests only, in line with government guidelines. For more information click here

About The Angel Hotel Leamington

The Angel Hotel's reception team are on hand to provide local information or answer any questions you have during your stay in Leamington Spa.

Our room rates include a complimentary full English breakfast, wireless internet access and a range of other services.

Morning calls and newspapers can easily be arranged and if you are short of toiletries, we can arrange those too.

We also have an award winning restaurant and a relaxing bar, open until midnight. Room service is available during our bar and restaurant operating hours.

There is limited car parking at the hotel (£5 per night). We are unable to take car park bookings, please check with us on arrival.
On street parking is also available free of charge from 6pm to 8am.

Additional parking can be found nearby, click here for a list of Leamington Spa town centre car parks.

The Angel hotel is located in the centre of Royal Leamington Spa, a lovely South Warwickshire town. Leamington's Georgian and Victorian architecture, tree-lined avenues and squares and glorious gardens, offers a unique experience to visitors.

Leamington has a good reputation for shopping, with a range of small independent run shops and boutiques to larger stores offering a wide range of products.

The town has a variety of wine bars, pubs, cafés and restaurants within walking distance of the Angel Hotel.

FIND OUT ABOUT NEARBY ATTRACTIONS 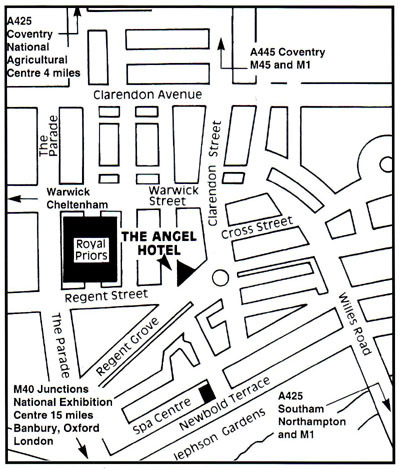 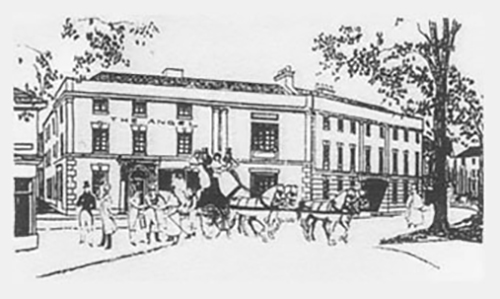 Now a thriving town centre hotel, the Angel is very obviously a coaching inn standing on the corner plot at the end of Regent Street in Leamington. The first reference point we have is an 1813 entry in the licensed victuallers’ records which lists Richard Ballard at the Angel Inn. The address of these premises was originally Cross Street, New Town, which was laid out circa 1808-1814 but, circa 1827, around the time Ann Ballard took over the business, it was renamed Regent Street in honour of the Prince Regent who had visited Leamington in September 1819, and the Angel was readdressed 1, Regent Street. The death blow to coaching in Leamington was delivered by the arrival of the railways, firstly the opening of the Leamington Terminus in 1844 [later to become Milverton station] and the completion of the Avenue station in 1851.

In 1844, when James Ballard insured the Angel with the district fire office [Birmingham] for £2,300, at a premium of £2.17s.6d, it was described as: “a dwelling house known as the Angel Inn, including a stable with loft over, fronting Regent Street; ... coach house, with room above, in the yard at the rear [now used as a joiner’s shop], saddle room, stabling, and room over [sometimes used as a club room], a store room for hay and straw, a dwelling house in Kenilworth Street adjoining the Angel Inn in the tenure of John Campion, near to but detached from the stable and loft”.

On the death of Ann Ballard in 1843, James, William and Henry Ballard inherited the Angel [Henry sold his share to William]. William was a builder so, at first, James ran the hotel but also ran into debt; too ashamed to face the court, he apparently sent his wife from a place of hiding to deliver his excuses. Declared bankrupt, James and William fell-out and the subsequent litigation lasted from 1852-58. For reasons in all likelihood relating to the bankruptcy, James Ballard was banned from keeping an inn/hotel in Leamington, or within a twenty mile radius, and in 1852 he leased the Angel to Lewis Chaffin Le Page from Bath. By then the building must have been in a dilapidated state, for Ballard agreed to mend all the broken windows in the inn, the coach house and the private dwelling next door [where he lived]. There was also a covenant to enlarge and improve the premises, “expending £150 at least”, as Le Page should direct; under Le Page’s management the Angel also acquired billiard rooms.

Also in 1852, the Angel was described thus: “Inn or Public House known as the Angel Hotel with yard, stables, laundry, and outbuildings.... and also two tenements adjoining.” By 1854 the rooms over the coach house were used as a brew house and malt room and the building in Clarendon Street, next to the stables, was used as an Inland Revenue office; James Ballard was described as “late innkeeper, but now collector of taxes.”

In the late 1850s, the ownership of the Angel returned to the Ballards, firstly William in 1857 and then Henry; evidently the Angel Inn was also renamed the Angel Hotel during the period 1857-60, as it was certainly ‘Hotel’ in 1861. James and Annie Proctor arrived in Leamington and took over the running of the hotel in May 1866; when husband James died in the December Annie carried on managing the business until marrying Thomas Welch and moving on to the Bath Hotel in 1870 [Annie died in 1903].

By 1876, Wellington Street had become part of Regent Street which was simultaneously renumbered from the western end, hence the change of number from ‘1’ to ‘143’. On 13th July 1898, Lucas and Co. Ltd [Leamington Brewery] purchased the Angel Hotel for £6,500; it would later be owned by the Northampton Brewery Company, Northampton.

In February 1972 the Angel Hotel opened a new aperitif bar, “relax in comfortable surroundings”, they said, “for that pre lunch or dinner drink, or just use the bar as a meeting place to have that quiet drink with your friends or business associates”.

In 1979, Ray and Betty Hinton [previously the owners of Leamington’s Hinton’s Wine Bar] purchased the hotel for an estimated £200,000 from Gwyn Jones, who had owned the property for the past ten years. Simultaneously, a planning application was submitted to the Warwick District Council by the new owners to refurbish the outside of the building and to carry-out alterations to the front elevation. Because of its architectural and historical merits the Angel is a listed building which probably delayed the start of the project. We have not yet been able to establish whether this refurbishment was completed during the Hinton’s tenure or whether it was undertaken by subsequent owners as the property would shortly change hands again.

In 1981 the Angel was bought by Gordon Faulkner, whose plans included increasing the restaurant’s seating capacity from forty-five to eighty and having a new look bar and reception area by early 1982. The 18-bedroom, two star hotel changed ownership again in August 1984 when it was purchased by Mike Duffy and business partner David Bundy for a reported £250,000; Duffy was previously general manager and director of the 220-room St. Johns Hotel in Solihull for sixteen years. The Angel then underwent a major refurbishment, including the addition of twenty-one new bedrooms, which was reportedly completed in the September at a cost of £400,000.

The Angel went into receivership in October 1991 with debts reported to be around £1 million and in 1992 the new owners were Dennis Clifford and Bernard Swindells who purchased the Angel for an ‘undisclosed figure. Following the departure of Bernard Swindells to follow other business interests, the Clifford family became owners of the hotel and remain so today.

The Angel Hotel is now thriving as an excellent town-centre venue for business and leisure travellers, as well as having one of Leamington's finest restaurants. The Angel's conference facilities and function rooms make it the perfect choice for eating out, parties and meetings.

We thank the authors of “Pubs of Royal Leamington Spa – Two Centuries of History” [Allan Jennings, Martin Ellis, Tom Lewin] for their assistance with the compilation of this history.

FROM THE NEC
<
View Larger Map

We use cookies on our website to ensure that we give you the best possible user experience.
If you continue without changing your settings, we'll assume that you are happy to receive all cookies. Accept & Close Read More

This website uses cookies to improve your experience while you navigate through the website. Out of these, the cookies that are categorized as necessary are stored on your browser as they are essential for the working of basic functionalities of the website. We also use third-party cookies that help us analyze and understand how you use this website. These cookies will be stored in your browser only with your consent. You also have the option to opt-out of these cookies. But opting out of some of these cookies may affect your browsing experience.
Necessary Always Enabled

Any cookies that may not be particularly necessary for the website to function and is used specifically to collect user personal data via analytics, ads, other embedded contents are termed as non-necessary cookies. It is mandatory to procure user consent prior to running these cookies on your website.